Choose your region to schedule a demo.

For the last decade, MedStar Mobile Healthcare in Fort Worth, Texas, has been at the forefront of innovation in EMS, through its community paramedics, partnerships with local healthcare providers, nurse triage line and other patient-centered solutions. In fact, the organization may be known more for the transports it avoids than the ones it performs. But with sole responsibility for all emergency and non-emergency transports in Fort Worth and surrounding communities, more than 108,000 of MedStar Mobile Healthcare’s 158,015 responses to ambulance requests in 2019 resulted in hospital transports.

Every day, MedStar responds to hundreds of calls, often alongside first responder agencies from the local communities it serves. The organization’s communications center serves as a secondary public safety answering point (PSAP), receiving hundreds of transfers from local primary PSAPs each day. 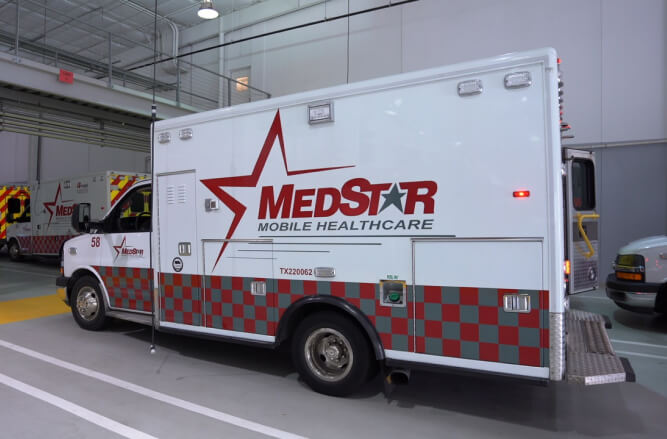 Generally, ambulance crews are deployed to optimize response times and serve the community as effectively and efficiently as possible. But their CAD system couldn’t keep up as MedStar continued to seek ways to innovate and take advantage of the power of technology.

After several years with the same CAD vendor, MedStar was looking to explore new options that would support their efforts to deliver world-class care to their community. Their priorities included finding a partner who would provide a high-level of customer service, support their community healthcare programs, and perform system upgrades without knocking the system offline for hours at a time or requiring reinstallation of integrated software. MedStar’s leaders also hoped to find a CAD with built-in features such as dynamic deployment recommendations and data analytics, so they could avoid having to add “bolt-on” software that could make the system even more cumbersome.

To manage a system this complicated, MedStar’s leaders knew they needed a dispatching solution that would have the flexibility to integrate with several other CADs and records systems, while also providing real-time system status analysis and deployment recommendations. Logis IDS fit the bill, and the MedStar team was impressed by its integrated coverage, demand management and automated dispatching capabilities, as well as its mobility—instead of bulky laptops in the ambulances, MedStar’s crews could access all relevant parts of the system from mobile devices—in the ambulance or in a patient’s home.

Making such a significant operational shift is a big challenge, and with lots of planning and collaboration, the new CAD went live in December 2016.

“The most stressful time for me is when we went live with the CAD for the first time, when we literally shut one CAD down and moved to the Logis system,” said Matt Zavadsky, MedStar’s Chief Strategic Integration Officer. “But Logis was focused on helping us navigate that. It looked like a giant war room, the level of attention to detail and service was phenomenal.”

One of the most noticeable immediate impacts is on the dispatch staff—Logis IDS CAD makes the dispatcher’s job easier. The Logis IDS CAD handles the routine management of deployment and dispatch, freeing up dispatchers to focus on situations or responses that may be outside the norm. The dispatch center became noticeably calmer—and quieter—as did radio traffic in the field. And as call volume increased over time, MedStar found its communications center didn’t have to grow along with it.

“Our dispatch staffing levels have pretty much stayed at the same level for a little more than 3 or 4 years, in a large part because of the decrease in the dispatcher attention that’s required for most calls,” Ken Simpson, MedStar’s Chief Operations Officer, explained. “Logis makes the response recommendations for emergency calls, and on the non-emergency side it takes into account the time it will take for the interfacility transfer, anticipated traffic, and more before recommending which crew to send.”

Rather than relying on a separate software package to manage its dynamic deployment, MedStar now has that capability in the CAD itself. And instead of having to manually build posting plans for different situations, the agency can rely on Logis IDS to continually analyze the system’s status and use historical data to predict future calls and make deployment decisions. These demand-based heat maps and automated deployment recommendations help keep response times low by optimizing the positioning of resources no matter what the situation.

The Logis IDS system is rule-driven, meaning MedStar can decide what information the CAD should use to make dispatch determinations. For example, instead of always recommending the closest ambulance crew for an emergency call, MedStar and Logis collaborated to have the system recommend a crew based on where that unit would be 60 seconds later, once the incident was fully dispatched. That way an ambulance traveling across I-20 wouldn’t get the call after they’d just passed by the appropriate exit and were now out of position, which can add time and frustration for all. The Logis system accounts for call priority, traffic, shift end times and other factors as well.

The switch to Logis IDS has also supported MedStar’s community health programs, which take a patient-centered approach to providing out-of-hospital care. The system has allowed MedStar to pre-determine response plans based not only on call types and locations, but in some cases by the individual patient. If a person is already enrolled in MedStar’s high utilizer program, for example, the CAD can identify the individual and recommend sending a community paramedic, even if the caller is not calling from their home address. When MedStar partnered with one of the area’s largest payers on a population-based payment model, the payer sent a file with member names and contact info—MedStar simply uploaded the file into its Logis CAD, and now its dispatchers can identify those callers by their phone numbers, names, and other information—even if it’s the first time they’ve called 911.

These same features have allowed MedStar to input information provided by county health officials and alert personnel who are responding to a patient who has tested positive for COVID-19, not simply a location that may or may not be the patient’s home.

MedStar and Logis continue to collaborate to find ways to improve operations and make the agency more effective for its patients and community. Recently they began implementing Logis Billing, which uses some of the same strategies of inter-operability and automation to take care of routine billing procedures and allow MedStar’s staff to focus on the cases that need attention.

From pandemic response to emergency operations to mobile integrated healthcare, MedStar’s innovations and forward-thinking approach to EMS have been made possible because of its partnership with the team at Logis.

Stay in the Loop

Join our newsletter for the latest user stories, best practices, and announcements.